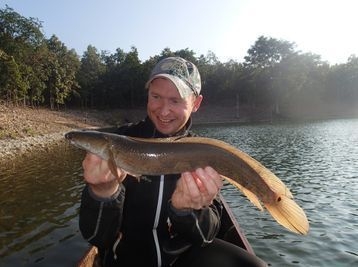 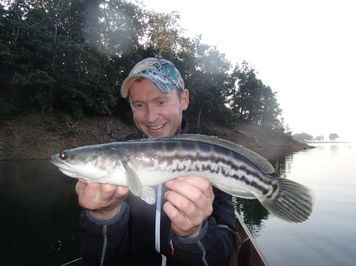 Being a fishing guide, there are days that I would feel that the day was a disappointment in terms of the amount of fish caught or the weather that prevents us from fishing. There is even more pressure when guided trips involves a reservoir so big and an angler that has never fished for a Giant Snakehead before. Fishing in stocked lakes allows myself to try and find various techniques that would get a fish to bite but there is no such thing in the reservoir. Anglers can go days without seeing a single fish in the reservoir. With this trip happening in December and Thailand's temperature being exceptionally cool this year, there was a concern that catching fish may be difficult. A two day trip certainly allows us a better chance at catching a fish since we have have the next day to go back and think what we are doing wrong as well as consider our fishing location.

The first day started with cool winds greeting us at the boat launch with white cap waves and fog rising from the water. There was no turning back now since we have two days to catch a Giant Snakehead and Thijs was determined. All we needed to do was to find bays and inlets to hide from the wind and hope that the fish thinks the same way too. There were constant attacks on the lure but it didn't seem like the fish were actually attacking it to eat the lure but rather to chase it away from their territory. The day ended with a Thijs catching one baby Giant Snakehead.

One of the most important part in catching a fish in Thailand's reservoir is the ability to cast long distances to where the fish is. With a lot of sight fishing being incorporated, anglers must be able to get their lure to where we need it to be. That is concern for new anglers in Thailand's reservoir but Thijs had no problems. His distance and accuracy in casting made it a much easier day to get bites as well as improve his chances of landing that fish. It was actually a thing of beauty to watch and see cast after cast landing on the spots that the boatman and myself pointed out. There were moments when we pointed put a spot where I wouldn't have tried to reach but Thijs was so accurate the boatman was in awe. 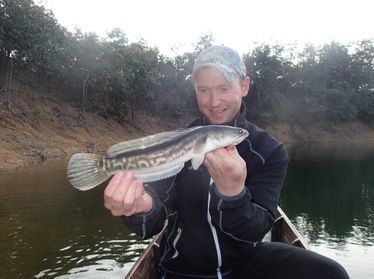 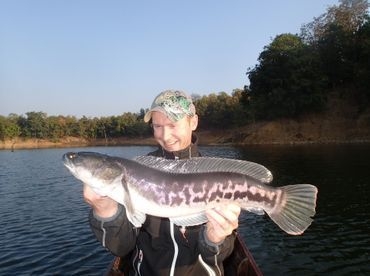 The second day was a little more productive with the decision to fish the rocky islands rather than staying in the bays with vegetation. Thijs quickly landed a a Giant Snakehead that was slightly bigger than he had previously caught. After that, the hits just kept coming with fish getting bigger and bigger. The biggest fish was landed in the most exciting way with the boatman pointing out an area that looked like a Giant Snakehead was chasing minnows. Thijs quickly casted past the disturbance and was soon greeted by a bigger fish that crushed the lure passing his face. All in all, a half day of fishing landed five fish for Thijs for the day which also included a rare Cobra Snakehead.